Hot of the press- the two boys Benson and Austyn supported Wade at the launch of the Guringai Festival last Friday night.

It was a special night for Wade as his art work was selected with his story to feature in a brochure that was reproduced over eleven councils in northern Sydney to celebrate and promote the many local events in the lead up to Sorry day, Reconciliation week and NAIDOC. Wade was gifted a good quality multi day back pack with the story of – ” This boy is going places” in acknowledgment of his art.

The whole house actually supported Wade with attending the launch and although we had a speech in response planned, Wade got nervous and didn’t get the opportunity to speak. If you open the link to page two though you will see his words to the story behind his painting and  hotos of his art work. http://www.asgmwp.net/images/GuringaiBooklet2013_9April%20LR.pdf

About Guringai Festival Founded in 2001, the Guringai Festival aims to raise awareness of Aboriginal and Torres Strait Islander people living in the Northern Sydney region. The festival usually starts on Sorry Day 26 May and goes through to the end of NAIDOC Week, the second week in July each year. The festival involves 11 councils and numerous reconciliation and community groups. Events include workshops, art exhibitions, performances, films and talks. Photos attached are of of Wade developing his painting ideas with Kerri Kenton at an Aboriginal language art workshop – the theme was identity. 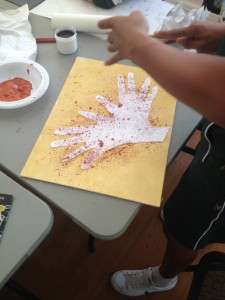 Wades story has levels. One level is becoming friends with many at PHCS and another level is a transcript of his story of reconciliation.